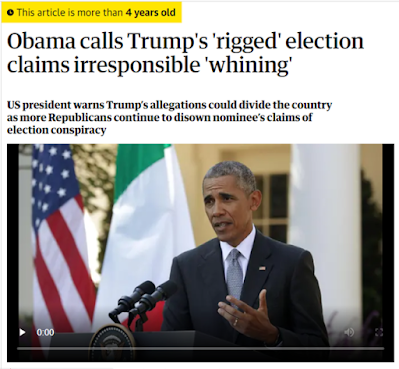 A good friend of mine does not believe the 2020 election was rigged because of the "enthusiasm for Biden" that was behind the scenes that drove voter turnout.

Okay, I'll agree that quite a bit happened behind the scenes....and behind the barricades and poster boards and whatever else Democrats could find to help block vote counting from view.  Those acts helped give Biden the edge.

But then he also made the argument that if I thought 2020 was rigged in the election system, then why don't I believe that 2016 was rigged for Trump to win.

At first reaction, I stated that if 2016 was rigged for Trump, then Clinton and the Democrats would have raised holy hell about it.

Next, I stated that even though Clinton did not make claims that she lost because of rigged election, she made several other excuses including her second most famous conspiracy theory that the Russians interfered on Trump's behalf.

The US Intelligence Community released a report in January 2017 stating that although Russia favored Trump, they could not determine if that had any impact on the election results.   Interestingly enough, the report also stated Russia attempted to influence the 2012 election -- but the media didn't report on that because Obama won.

I was about to leave it at that but my friend pressed me a bit more about it and then it dawned on me that he was right.

The 2016 election was rigged -- for Hillary Clinton

It makes perfect sense that Mueller and the IC deep state conglomerate didn't "find" any evidence of vote manipulation.  They weren't asked to look for it.

And, given the number of mad dog Democrats on Mueller's team, if they discovered it they would have buried it.

Clinton could not blame vote rigging because it would have flown in the face of Barack Obama, who stated:

“....no serious person out there who would suggest somehow that you could even rig America’s elections.”

It is very possible that Obama was providing cover for the upcoming rigged 2016 election.

It is a fact that the DNC rigged the Democratic nomination for Clinton.

So it's not a stretch to believe that the Clinton political machine understood that she could win the 2016 election in the same manner as socialist dictators -- by rigging the vote count.

In the days leading up to election day, the Clinton campaign claimed she had the election won and that they were shifting focus to winning down ballot races.

Clinton, and her legacy media sycophants expected a coronation on election night because they knew it was rigged.  That was real shock and expressions of disbelief on their faces in the wee hours of the morning after Trump had beaten the 2016 cheat.

Given the razor thin margins of Trump victories in Michigan, Wisconsin, and Pennsylvania, it is truly puzzling Clinton did not immediately file for recounts.

According to media reports, Clinton and her advisors were “intensely reluctant” to question the integrity of the voting system -- purportedly because of Trump's allegations of a rigged election.

Stating that Pennsylvania’s election system was “a national disgrace,” Stein called for forensic audits of the voting machines in Michigan, Pennsylvania, and Wisconsin.

In Pennsylvania, Stein received an average of 114,668 fewer votes than other Greens on the statewide ticket.  Interestingly, that number is practically the same as the number of "missing" write-in votes for Pennsylvania in 2020 (i.e., 113,417).   Michigan likely cheated Stein out of around 50,000 votes based on the other candidate vote total in state-wide races.

Comparative down ballot races were not available in Wisconsin in 2016.

"THE ACADEMICS PRESENTED FINDINGS SHOWING THAT IN WISCONSIN, CLINTON RECEIVED 7 PERCENT FEWER VOTES IN COUNTIES THAT RELIED ON ELECTRONIC-VOTING MACHINES COMPARED WITH COUNTIES THAT USED OPTICAL SCANNERS AND PAPER BALLOTS. BASED ON THIS STATISTICAL ANALYSIS, CLINTON MAY HAVE BEEN DENIED AS MANY AS 30,000 VOTES; SHE LOST WISCONSIN BY 27,000.”

It was safe for Clinton to support an audit in Wisconsin because there were no other Green Party candidates in state-wide races that might tip the auditors to Stein's votes being stolen.

"Because we had not uncovered any actionable evidence of hacking or outside attempts to alter the voting technology, we had not planned to exercise this option ourselves."

Poorvi Vora of George Washington University stated that vote-scanning machinery could be infected with malware that changes the record of votes, and a manual count of paper ballots would be the only way to know if there had been vote manipulation. Professor Philip Stark from the University of California also claimed that Trump's winning margin in Wisconsin could easily be within the margin of error for optical voting systems.

Stein’s campaign argued that if voting machines were tampered with, using those same machines to re-tabulate the votes “risks tainting the recount process."  A Wisconsin judge refused to order a statewide hand recount, but allowed counties to use a method of their choosing.   Trump gained votes in the recount.

Little to no data can be found about how Stein fared in the Wisconsin recount.

In Michigan, Stein's recount was halted when a Circuit Court judge ruled she didn't have standing because she received only 1% of the vote.

U.S. District Court Judge Paul Diamond rejected Stein's request for a recount in Pennsylvania, writing that her claims of suspected hacking of the election "bordered on the irrational."

Unfortunately, Judge Diamond and many others in the legal profession have no idea how easy it is to hack an election.   They also don't understand how difficult it is to hide the fraudulent election results from statisticians.

Simply put, the Democrats fell victim to their own biased polls.

The vote rigging algorithm designed for a Clinton 2016 victory was unable to overcome the surprising election day turnout for Trump and there was not enough time to fix it in just a few hours that remained to count votes.

The rigging of the 2020 election was built off the lessons learned from 2016:

1.  Use the 2016 results and history to determine the needed margin of victory.

2.  Use mail-in ballots that do not require voter identification to stuff the ballot box.

3.  Extend the time for counting the votes.

Moving forward to 2020, even with those lessons learned, the Democrats still underestimated Trump and relied on historical data that he would underperform his 2016 total,  just as most second term candidates do.

As the election data shows, Trump defied history a second time by blowing away his vote totals from 2016 and that meant the 2020 algorithm wasn't going to generate enough votes

Unlike 2016, the extended voting period allowed Democrats time to fix the algorithm.  Data from multiple states shows that's exactly what happened at 3AM when the count was shut down.

Data analysis confirms that the algorithms differed from Pennsylvania to Georgia.

In Pennsylvania, prior to 3AM, the algorithm was assigning some votes for Trump and the write-in candidate to the adjudication folder, after which they were reassigned to Biden.  When it was determined that Biden could not overcome Trump's lead, the algorithm was changed to subtract votes from Trump's running total and move them directly to Biden.  The vote shifts are verified through analysis of the Edison Research that records the vote totals.

In Georgia, prior to 3AM, the algorithm was moving small quantities of votes from Biden to Trump before recycling them back to Biden. It was also shifting votes in the same indirect manner as in Pennsylvania.  After 3AM, the algorithm discontinued the process of reassigning/recycling Biden votes.

Industry executives from Dominion and other election systems providers stated vote switching does not occur, however the data proves their statements are false.

While former administration officials have claimed that there was no widespread voter fraud it is quite obvious they haven't examined the data.   They also rely on this fallacy about paper ballots.

"All of the states with close results in the 2020 presidential race have paper records of each vote, allowing the ability to go back and count each ballot if necessary," they wrote. "This is an added benefit for security and resilience. This process allows for the identification and correction of any mistakes or errors."

According to a research paper by Appel, DeMillo, and Stark, voting machines (ballot marking devices) can be infected with malware that will change the vote after the voter has verified the ballot image -- then print out a fraudulent ballot that the voter may not carefully review (and miss the cheat).   From the study:

The idea is that malicious software on the ballot marking device could display the voter's correct selections on the computer review screen, but then substitute its own choices on the printed ballot. The voter may not carefully check the paper record, and so fail to detect the act of cheating by the BMD. This concern has resulted in some security experts advocating for the banning of BMD devices altogether and relying on hand-marked paper ballots exclusively.

The vote shifting malware, working in conjunction with an algorithm, would subtract Trump or minor party candidate votes and create Biden ballots to replace them.

This fraud would be undetectable in a recount.

The extended vote counting in 2020 provided enough time to change enough votes to push Biden past Trump -- unlike in 2016 when the clock ran out on Hillary Clinton.