JULY 13, 2021:  Smoking gun evidence of an Election Management System (EMS) error in the City of Detroit during the November 2020 election has been revealed.
Shortly after the election, Keith Kaminsky was among many thousands of Michigan voters who filed affidavits citing voting irregularities.  Kaminsky manned Precinct 374 in the city of Detroit and discovered that the voting system was not counting write-in votes.
According to the official results, there were ZERO write-in votes for Precinct 374.
Precinct 374 Results
Results:
Biden 189
Trump   9
Jorgenson 0
Blankenship 0
Hawkins  1
De La Fuente 0
Write-in  0
As the graphic at the top of the page shows,  there were no write-in votes recorded in the entire City of Detroit!
It gets worse.
The official results also show that NO WRITE-IN votes were recorded for any of the contests held in the November 2020 election.
None of them.
Not the U.S.  Senate nor the 14th Congressional District, not the state Board of Education, not the Trustees races for the University of Michigan and Michigan State, not the Governor of Wayne State University, nor any other race.
This is smoking gun evidence of an Election Management System (EMS) failure in the City of Detroit.
As the Kaminsky affidavit states:  "The machine did not have any of these ballots go the write-in bin."
By the "write-in bin," Kaminsky means that the ballot should have been sent to an adjudication station and that poll workers should have been deployed to determine for whom the vote was cast.
Only a forensic audit can determine the reason why this did not occur in Detroit -- and if it also did not occur in other precincts or counties.
In fact, it DID NOT occur in Antrim County.
According to the Michigan Secretary of State's (SOS) official forensic audit report for Antrim County, write-in vote adjudication didn't occur.
"Adjudication is an optional feature of the Dominion system and was not used in Antrim County."
The Antrim County official election results confirm that the adjudication feature was not used because there are no write-in votes assigned to individual candidates for any office -- all 23 write-in votes for president are listed as "unresolved."  Similarly, all of the write-in votes for state-wide offices are "unresolved."
Only a forensic audit can determine if the issue in the City of Detroit was simply a problem such as the election officials not enabling the adjudication module or if it was something more nefarious, like malware recoding the ballot definition file to switch votes (see #2 & #3 below).
Michigan Senate Panel's Flawed Report
Michigan Senators Edward McBroom, Lana Theis, Jeff Irwin, and John Bizon released a report last month alleging that there was not widespread voter fraud in Michigan and attempted to refute claims that votes were manipulated by hacking or other intrusions to the system by bad actors.
Former Michigan state senator Patrick Colbeck provided a blow-by-blow rebuttal to the report here.
While I won't repeat the entirety Colbeck's work, I will add information to four important areas of the flawed Senate report:  1) the Antrim County vote switches;  2) veracity tabulator slips; 3) election hacking and manipulation; and 4) vote dumps
1. Antrim County Vote Switches
Incredibly (and incompetently?)  the Senate report repeats the false statements that the Antrim County, Michigan vote switching problem was caused by "human error."
Three different forensic audits, including that of the Michigan SOS, refuted the "human error" argument and instead attributed the vote shifts to the voting systems.
The Michigan SOS forensic audit (aka, Halderman),  the Allied Security Operations Group (ASOG) audit, and a review by expert Jeffrey Lenberg confirm that votes were wrongly shifted in the election due to software issues. Halderman specifically noted that the ballot definition file used on November 3 was not correct and caused the wrong vote tallies.   Lenberg referred to this problem as swapping of internalMachine IDs, while the ASOG report stated that "election processing issued on were not accurate and used a second version of the software to process votes."   To be clear, the vote switches in Antrim County were caused by the wrong numbers (codes) being associated with the presidential candidates in numerous precincts.
The SOS report (at 22) contains a chart that shows Trump's votes were shifted to Biden and Jorgenson's votes were shifted to Trump in many precincts and that resulted in the miscount of 7,761 votes for Biden to 4,504 votes for Trump.   The chart also includes the corrected total of 9,748 for Trump to 5,960  for Biden. 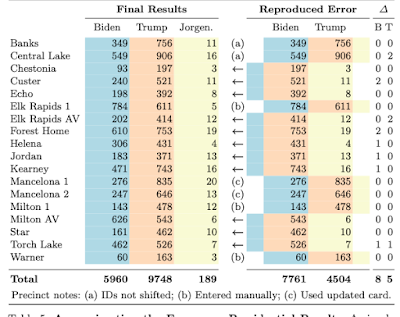 The forensic analyses by Halderman, et al, are beyond dispute -- votes were shifted by machines, not humans.
Halderman (in 2016) wrote that malware could infect voting machines and cause votes to be shifted.
Again, the citizens of Michigan need to know what was behind the vote shifts and a full forensic audit will tell them that.
2) The tabulator slips in Antrim County
The Michigan Senate committee report provides a completely dishonest account of the vote totals on the tabulator slips.   The Senate report stated the first count on the tabulator slips from election night (11/4) matched the final recount (11/21) within a few votes.
The SOS report refutes the Senate report, as does ASOG.
Here is the SOS report showing the incorrect totals for Biden and Trump on 11/4 and the correct total based on the recount posted on 11/21: 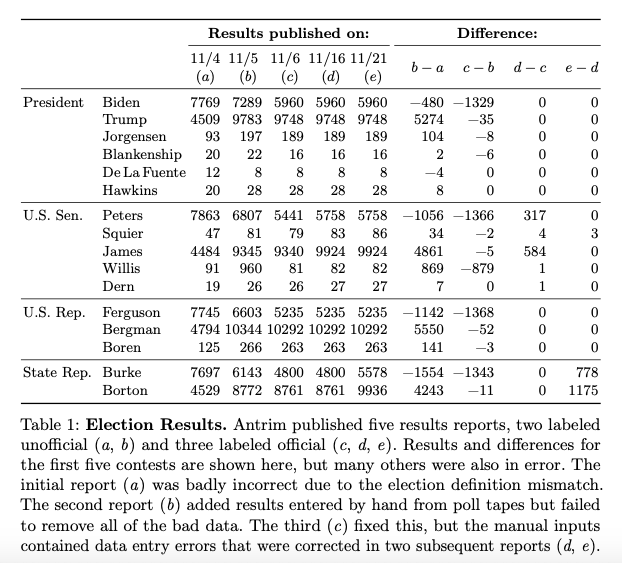 Here is the ASOG report's version (that cuts out interim counts), but matches with the SOS on the critical dates.

These examples show that the tabulator tapes count whatever the tabulator sends them and that the tabulator tape reflected the incorrect results originally.
3.  Election hacking and vote manipulation
The Michigan Senate committee trotted out the tired argument that the election wasn't hacked because tabulation systems were not connected to the internet.  The report went on to state that the results were transmitted from the tabulators at Detroit's TCF center to the clerk's office using flash drives.
According to numerous experts (Halderman, Appel, Stark, et al), the easiest way to hack an election is for bad actors use removable media, such as flash drives or memory cards, to infect the system with malware or to upload fraudulent votes.
Recognized election experts, Princeton University computer science professor Andrew Appel and University of California Berkeley statistics professor Philip Stark (who is one of the creators of the Risk Limiting Audit) wrote the following about removable media hacking in a 2020 paper on evidence based elections:

Former hacker and IT expert, Mehow Pospieszalksi stated that you don't necessarily have to be a hacker to manipulate the system.  All it takes is someone with administrative access, like an election worker.
The Michigan SOS's expert J. Alex Halderman wrote in a 2006 paper that malware can be injected by anyone with access to a voting machine.
Anyone who has physical access to a voting machine, or to a memory card that will later be inserted into a machine, can install said malicious software using a simple method that takes as little as one minute. In practice, poll workers and others often have unsuper- vised access to the machines.
In the same paper, Halderman wrote:
Malicious software running on a single voting machine can steal votes with little risk of detection. The malicious software can modify all of the records, audit logs, and counters kept by the voting machine, so that even careful forensic examination of these records will find nothing amiss. We have constructed demonstration software that carries out this vote-stealing attack.
Halderman's latter statement underscores the need for a full forensic audit that examines the paper ballots and the election software.
Finally, hacking the election does not require access to the tabulators.   An election can be hacked by accessing the electronic poll book (EPB)/qualified voter file (QVF) and changing the status of the voters.  Electronic poll books are typically connected together via a (hackable) local area network in order to allow sharing of the most recent updates among poll workers regarding eligible voters.
A bad actor could access the EPB/QVF to change the status of a person who has not voted could have his/her status changed to voted in order to prevent them from casting a vote (or having to file a provisional ballot).
A 2020 documentary, Kill Chain, featuring Halderman and election expert, Harri Hursti, explains how the latter scenario may have occurred in the Georgia 2018 gubernatorial race to suppress votes.
Conversely, the EPB/QVF could be accessed by bad actors to change the status person who has already voted to not voted, thus enabling a second ballot to be cast under that voters name.
The latter type of hack would have the potential of enabling the production of thousands of fraudulent ballots.  This hack would be necessary to enable large vote dumps.
4.  Vote Dumps
The Michigan Senate report attempted to discount allegations of a massive vote dump at the TCF center at approximately 3:30 AM on November 4th, writing:
"They allege this occurred between 3 – 5 a.m. and that they were brought onto the floor to be counted. Chris Thomas, the senior elections advisor for the city of Detroit, stated he estimated 16,000 ballots were delivered to the TFC Center around that time. Some other persons and media speculated it was nearly 100,000, but most reported about 30,000-45,000. These ballots were submitted throughout Election Day at different locations, such as drop boxes, in the mail, and at the clerk’s main and satellite offices.
The official election results transmission from Michigan reveals that a vote spike of 149,772 total votes -- 135,290 or 95% of them for Biden and 5,968 votes (4%) for Trump -- occurred approximately 3 hours after the delivery of votes (6:30 AM) on November 4, 2021.   This is the single most anomalous data point in the 2020 election.
The Non-Trump/Biden (aka Write-In, Minor Party or WIMP) vote of 2,546 is over half of Trump's total of 5,968 votes in the dump.  That too is a suspicious result.
The graphic below shows how that dump impacted the election outcome in Michigan. 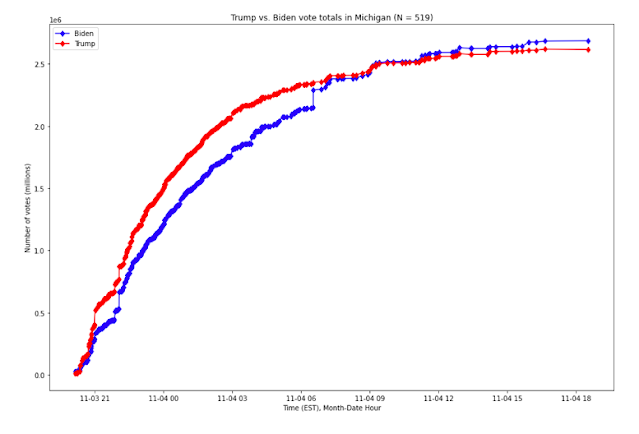 Why didn't the Michigan senate committee look downstream at the election results to determine the vote count that resulted from the 3:30 AM vote dump?
The Michigan senate wasn't attempting to find out the facts about the 2020 election -- they were using false information in order to sweep the massive voting fraud in Detroit and elsewhere in Michigan under the rug.
-- Ray Blehar,  July 13, 2021 at 6:45 PM EDT, Updated July 14, 2021, 9:20 AM EDT,
at July 13, 2021
Email ThisBlogThis!Share to TwitterShare to FacebookShare to Pinterest
Labels: adjudication, ASOG, Detroit, Election Fraud, forensic audit, Halderman, Kaminsky affidavit, Lenberg, malware, Michigan, Secretary of State, Senate, SOS, vote dump, write-in votes