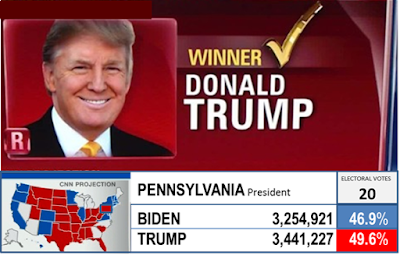 Rudy Guiliani can quit arguing about Pennsylvania not counting some 600,000 unlawful votes cast in Pennsylvania and start arguing that nearly 290,000 voters need to have their votes restored.

It's a 14th Amendment, equal protection clause issue to be sure, as their right to vote for the candidate of their choice was DENIED.

Once all of the votes strings are put into a spreadsheet and requisite computations performed, the cheating stood out like a sore thumb.

There were three main tipoffs to vote transfers:

3.  Trump losing votes at a time he should have gained votes (move from Trump to Biden).

Here is how the outcome changes when the algorithm is reversed. 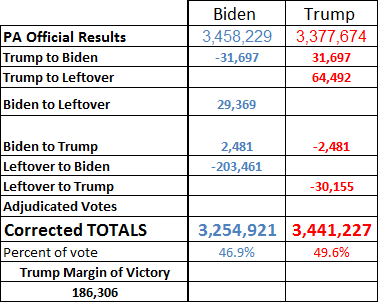 Interestingly enough, the data revealed that there were problems with the algorithm early in the vote count and a major correction had to be done.   After the correction, no more votes went from Biden to Trump.

Biden received votes from the Third Party 39 times for  a grand total of 203,462 added votes....another 29,369  votes that were allocated from his total to the Third Party were recycled back to him.

Biden received votes directly from Trump on 9 occasions for 31,697 votes.

New votes for minor party candidates were allocated to the third party 59 times (for 159,986 votes).

Another 64,492 votes were taken from Trumps running total and moved to the third party.

Overall, the software algorithm stole 246,377 votes from Trump and others and passed them to Biden.

Here is a snippet of how the scam worked.

Four lines down, there is a yellow highlighted line where the THIRD PARTY loses -6,385 votes.

That pattern to Biden occurred 74 times and most of the time he received in the neighborhood of 6,000 votes.   The latest theft of 6,757 votes occurred on November 17, 2020 at 9:11 PM EST...the software algorithm will run until someone stops it.

Update: Algorithm did not steal any more votes after November 17th.

The evidence is clear: the software was rigged to steal the election for Biden....

....and undermined THE WILL OF THE PEOPLE.

Updated March 4, 2021 to reflect minor party votes that were moved to Biden.