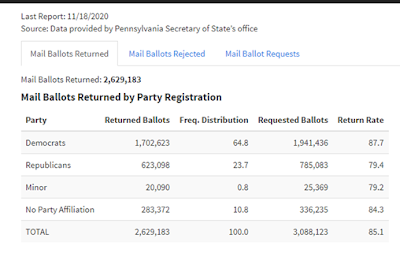 According to Pennsylvania's certified election results, Joe Biden received 1,995,691 mail-in votes in the 2020 election.  Those votes erased President Trump's Election Day lead and eventually won him the Keystone State by 80,555 votes.
While the votes were counted that way, it is unlikely they were cast that way.
On Election Day, Trump led Biden by 1.3 million votes and that's where the math problems for Biden starts.   Given there were 2.6 million mail-in ballots, Biden had to obtain about 76% of them to win.
While Democrats made up about 65% of the mail-in ballots, Biden needed another 11% (or 293K) votes to reach his purported total of 1.995 million votes.
As I wrote in my prior post, the GOP and Democrat voters had similar disloyalty percentages at 8% and 7% respectively.   These percentages were confirmed by numerous exit polls in Pennsylvania.  The disloyalty problem effected Biden more than Trump based on the numbers of mail-in ballots, which would result in a 69K net loss for Biden.
Biden really needed 352K votes to get to his purported total of 1.995 million after removing Democrats and Republicans from the mix.
As you can see from the graphic at the top of the page, the combination of Non-Affiliated and Minor Party voters is approximately 303K and there is no legitimate way Biden could have gotten the vote total that Pennsylvania's election system determined on November 6, 2020.
When you combine the mail-in ballot math with other election data it reveals that the election system selected Biden, not the voters.
Non-Affiliated and Minor Party Voters
Go to any election web-site like Politico, CNN, or FOX and mouse over any state on the map.   You'll see just the results for Biden and Trump -- with no option to look deeper at how the minor candidates performed. 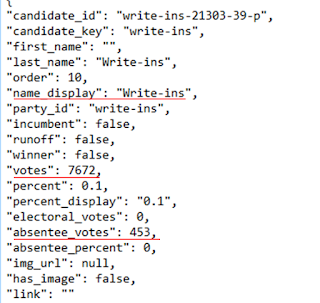 Conversely, Reuters news service give the viewer the option of seeing greater details, such as the votes for Libertarian Jo Jorgenson and write-in votes -- and that's where you find the improbably low number of 7,672 write-in votes.
Reuters, like many other news services, uses Edison Research data for its election reporting.  The Edison Research data matches the certified election results in most states.  Pennsylvania's is an exact match except for a handful of votes difference in Allegheny County.
The image at right is the Edison Research data fields for Pennsylvania's write-in votes. As you can see, there were a total of 7,672 write-in votes for Pennsylvania of which only 453 were by absentee/mail-in ballot.
The low number of absentee write-in votes is not credible and indicates that a systemic issue existed with absentee write-in vote tabulation.
PA Mail-In Votes Totals Based on Polling Scenario
Using CNN polling for Pennsylvania (that was similar to polling by the Washington Post and other media outlets), I plugged in the poll percentages against the mail-in votes to determine what a more realistic (legitimate) vote tabulation would resemble.  Please note that Jorgenson's total was taken directly from the Pennsylvania elections web-site because Minor Party voters were not part of CNN's poll.
Here are the results: 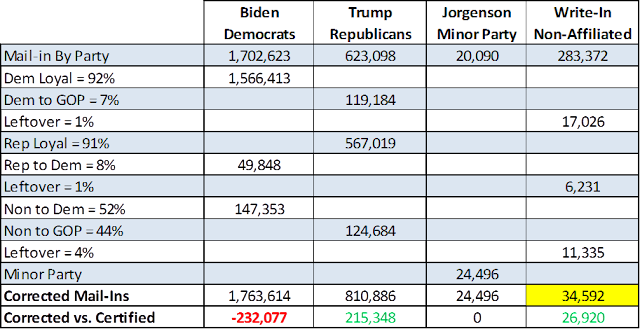 Reading across the bottom, Biden loses just over 232K votes while Trump gains just over 215K, meanwhile the Non-Affiliated/Write-In votes increase by almost 27K.
Note that these results are very similar to he vote switching analysis I performed in November determined that about 200K votes were incorrectly counted for Biden that should have gone to Trump and others (I'll show those computations later in the post).
Next, the yellow highlighted box (above)  shows that the corrected total of Non-affiliated/Write-in votes increased to 34,592 -- a number strikingly similar to the average number of votes for Green Party candidates in statewide races (highlighted box below).  However, the Green Party presidential candidate (Howie Hawkins) got less than 453 mail-in votes - about 34,000 less than the average.

If Pennsylvania is trying to defend its position that the 2020 election results were valid and accurate, these data are a really unlucky coincidence.
However, that's just one of the "unlucky" coincidences I found in Pennsylvania's data.
Here are the results for the GOP candidates on Election Day and by Mail-In ballot with the top vote getters highlighted in yellow.  At right are the differences between Trump and the top down ballot performer.   Note that Trump wins handily on Election Day and gets more votes than all other GOP candidates but loses by 64,492 votes to the Auditor General candidate in mail-in votes.

In yet another "unlucky" coincidence for those who believe the Pennsylvania election was free and fair from interference, vote switching analysis determined that 64,492 votes were taken from Trump and "laundered" through the Adjudication process (see below).

The shifting of those votes occurred over 19 adjudication transactions of approximately 3,000 votes on average.   In other words, the intent of the voter, rather than being determined individually by election workers, was being determined by the system in large batches.
The Democrat party results also indicate vote switching as Biden received 51,855 votes less than AG candidate Josh Shapiro on Election Day, but then received 54,206 more by mail-in votes.  Biden also got less Provisional votes than Shapiro, but ended up with 2,321 more votes overall.

For those who may not be familiar with Pennsylvania voting patterns, this is an usual result because the Democrat AG candidate typically gets far more votes than the Democratic presidential candidate.
In 2012, then AG candidate Kathleen Kane bested President Barack Obama by 135K votes.
In 2016, then AG candidate Shapiro bested presidential candidate Hillary Clinton by 130K votes.
In 2020, Biden squeaked by Shapiro by 2,321 votes -- all by virtue of his mail-in margin.
Correcting the Shifts
When the corrections are made and the vote shifts are reversed,  Trump (186K) and Shapiro (147K) both have significantly more votes Biden.
The table below shows what Pennsylvania's results should actually look like. 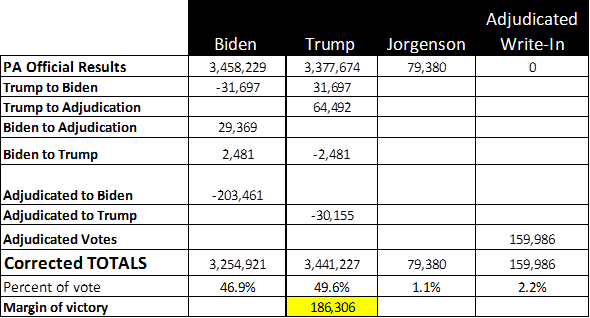 The Write-In vote total increases to 159,986 or 2.2% of the vote -- a far cry from the 7,672 write-in votes reported by Edison Research that were computed by Pennsylvania's vote tabulators.
The 2020 Write-In figure is about 36,000 votes more than the 123,019 votes cast by the Green Party, Constitution, and write-in voters in 2016.   However, the shifting of Libertarian votes in 2020 cannot be ruled out.
The 2020 results show that Jorgenson was about ~20K votes light in her total of mail-in ballots compared to the average received by other Libertarian candidates.

These anomalies in Pennsylvania's election results are not a matter of chance and are almost certainly the result of systematic vote shifting.
Vote shifting (or stealing) malware has been around since the time of Diebolt voting machines.   In 2016, computer scientists noted significantly different results in votes counted by paper ballots and scanners versus votes counted on voting machines.  A 2020 publication by the Georgetown Law Review stated that "malware can piggy back on removable media and infect voting machines" during the upload of ballot definition files and/or during software updates.
Therefore, it is rather plausible that malware or another software related issue is behind the shifting of absentee Write-In votes -- and not just in Pennsylvania.
Similar Write-In and Minor Party (WIMP) anomalies are present in the election results in the key battlegrounds of Arizona, Georgia, and Wisconsin -- all which reported zero (0) absentee Write-In votes.   Analysis of election time-series data, down ballot races, and historical comparisons in those states also provide strong evidence that Write-in and Minor Party (WIMP) votes were shifted.
RE-enfranchising the WIMP voters by correcting the vote shifts in Pennsylvania and the aforementioned states will result in the shift of 57 electoral votes from Biden to Trump and an election result based on the will of the people.
Trump 289
Biden  249
It's time to recount the votes and correct the math.
Next: Wisconsin's WIMP problem.
-- Ray Blehar, March 25 2021,  10:15 AM EDT