Wisconsin had a WIMP problem in the 2020 election.
WIMP is an acronym for Write-In and Minor Party.   The graphic above shows that WIMP votes declined by 132,307 votes from 2016 to 2020.     Similar declines have been found in other key battleground states -- for example:
Arizona:                Minor Party:  -106,100;  Write-In:  -51,238
Georgia:               Minor Party:    -83,192:  Write-In:  -20,155
Pennsylvania:       Minor Party:  -180,752:  Write-In: -113,417
Are all of these declines a coincidence?  Did  minor party and other voters decide to acquiesce and vote for a major party candidate?  Or do these declines represent this a systemic issue in our US elections/voting systems?
Evidence suggests the latter.
In each of the states listed above, the decline in Write-In votes was greater than Biden's margins of victory.
All Write-In votes must go through an adjudication process to determine the intent of the voter.  According to election systems certification documents, adjudication is supposed to be performed by an election worker under review of bi-partisan observers.   However, meaningful observation of adjudication was not permitted in many states due to social distancing requirements and/or by orders of the courts.  Therefore, Write-In votes could have been fraudulently reassigned rather easily by dishonest election workers.
It is possible that some instances involving dishonest election workers occurred, but the prevalence of the declines across the country makes it more likely to be an election system issue  -- and especially with absentee votes.
Absentee votes -- unlike in-person/election day votes -- are not subject to voter verification.
Any vote (Minor Party, Democrat, or Republican) could be subjected to fraudulent reassignment by the voting machines without anyone's knowledge -- until an after the fact audit or statistical analysis identifies the suspected fraud.
Across the United States, WIMP votes dropped from 7.6 million in 2016 to 3.3 million in 2020 -- a decline of 4.3 million votes.   Again, did the WIMP voters acquiesce and vote for major party candidates or was something else, like vote shifting, at play?
Pennsylvania and Arizona post-election analyses provides very strong evidence that vote shifting occurred during the tabulation of mail-in ballots.  The supporting evidence was from multiple sources, including analyses of the down ballot results and comparisons of in-person versus absentee votes.  These data were buttressed with time-series election reporting from Edison Research (scraped from the New York Times).
Wisconsin's election data shows a significant decline in WIMP votes, however there is neither down ballot data or voting method data to use in the analysis.  As such, the Wisconsin analysis relies on historical election data and time series data from Edison Research's National Election Polling (NEP) data.  About Edison:
"The NEP provides media organizations with real-time vote results in all 50 states for statewide races, ballot initiatives and House races. The NEP vote count from Edison Research is the only service continuously updated after Election Day. We track every vote until results are certified by all states. Vote count data is available for statewide results, vote by Congressional District, county vote data breakouts for statewide races, and all U.S. House races."
The scraped Edison data provides only the total votes and the percentage of votes for Biden and Trump.  As such, WIMP votes are determined by computation while shifted votes are determined by math combined with very rigid rule sets.
Even though the Edison percentages are accurate to only three decimal places and there are rounding errors involved, the end results are quite close to the official certified results with the exception of write-in votes (which appear to have been systematically undercounted).  See below.

According to the analysis, Wisconsin should have tallied about 45,000 more write-ins for 2020.  That would be an increase over 2016, which makes sense considering higher voter turnout.
The "missing" write-in votes (37,190) is more than Biden's eventual margin of victory.
Going back to 2016, Green Party candidate Jill Stein received 31,072 votes.  Comparatively, 2020 Green Party write-in candidate Howie Hawkins received just 1,089 votes -- a decline of nearly 30,000 votes.
Similarly, the Constitution party saw a decline of ~7K votes while the broad category of write-in votes (scattered) fell by 27,000.
Vote Shifting Analysis
A complete analysis of vote shifting in Wisconsin could not be accomplished because the data was truncated or otherwise incomplete.   Interestingly enough, vote shifting observed in the Edison data essentially stopped right after a large dump of votes at 3:42AM EST.

At the time vote shifting stopped, Biden had gained approximately 12,000 votes through the process while Trump had gained approximately 17,000.   Recall that in Pennsylvania, Biden and Trump had accumulated a similar numbers of shifted votes prior to 3AM -- after which, vote shifting to Biden became apparent in the time-series (Edison) data.
In Wisconsin, systematic shifts after are absent.  Instead, a massive vote dump occurred at 3:42 AM EST and it completely wiped out Trump's nearly 110,000 vote lead (see below) and provided Biden with a nearly 10,000 vote edge.   Shortly afterward, another dump of approximately 22K Biden votes provided the remaining margin of victory in Wisconsin. 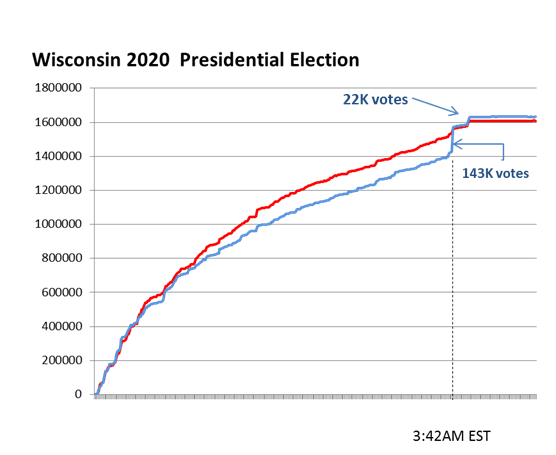 The initial Wisconsin vote spike shown above was the result of the following transactions:
Trump gaining  25,163 new votes;
Biden gaining 143,329 new votes; and,
A transfer of 156 adjudicated votes to Biden.
Even with rounding errors involved, the large volume of votes (168,648) should have included approximately 10,000 WIMP votes based on historical voting patterns (see chart below).
When social media users publicized this anomalous vote dump, the media fact-checkers quickly moved to debunk the claims of foul play regarding this vote dump.  The Reuters fact check did not ask the Wisconsin government about the vote dump and instead relied on fivethirtyeight.com for this explanation:
“Biden was down in Wisconsin before the Milwaukee absentee results came in early this morning. The boost pushed him up past Trump, but the race in this state is still very, very tight.”
The city of Milwaukee received 169,519 absentee ballots according to the Milwaukee County election commission, therefore the volume of the dump of absentee votes is confirmed by official records.  The breakout of the vote dump above reveals no WIMP votes included in that count.
The following chart shows the comparison of 2016 to 2020 voting in Milwaukee County.

Recall from earlier in the post that the Green Party vote total statewide fell by about 30,000 votes from 2016 to 2020.  Once again, another stunning similarity occurs as the Green Party received an almost identical number of votes in 2020 in Dane and Milwaukee.
The Green Party accused the Democrat party of voter suppression for its efforts to keep them off the ballot in multiple states.  It is highly unlikely that the Greens cast votes for Biden.  Also, the Green Party's eco-social platform would make those voters unlikely to cast a vote for Trump.   Where did all their votes go?
The post-mortem on the 2020 election is a work in progress, however it is quite clear that Biden won the election by winning a handful of urban areas in each of the swing states -- Milwaukee and Madison (Dane County)  among them.
These election results in those counties appear to be very suspect with regard to WIMP votes and, therefore, so does Biden's purported victory in Wisconsin.
-- Ray Blehar, March 31, 2021,  12:35 PM EDT
at March 31, 2021
Email ThisBlogThis!Share to TwitterShare to FacebookShare to Pinterest
Labels: 2020 election fraud, absentee votes, adjudication, algorithm, Dane County, mail in votes, Milwaukee, Ranked Choice Voting, vote shifting, vote spike, WIMP, Wisconsin, write-in votes